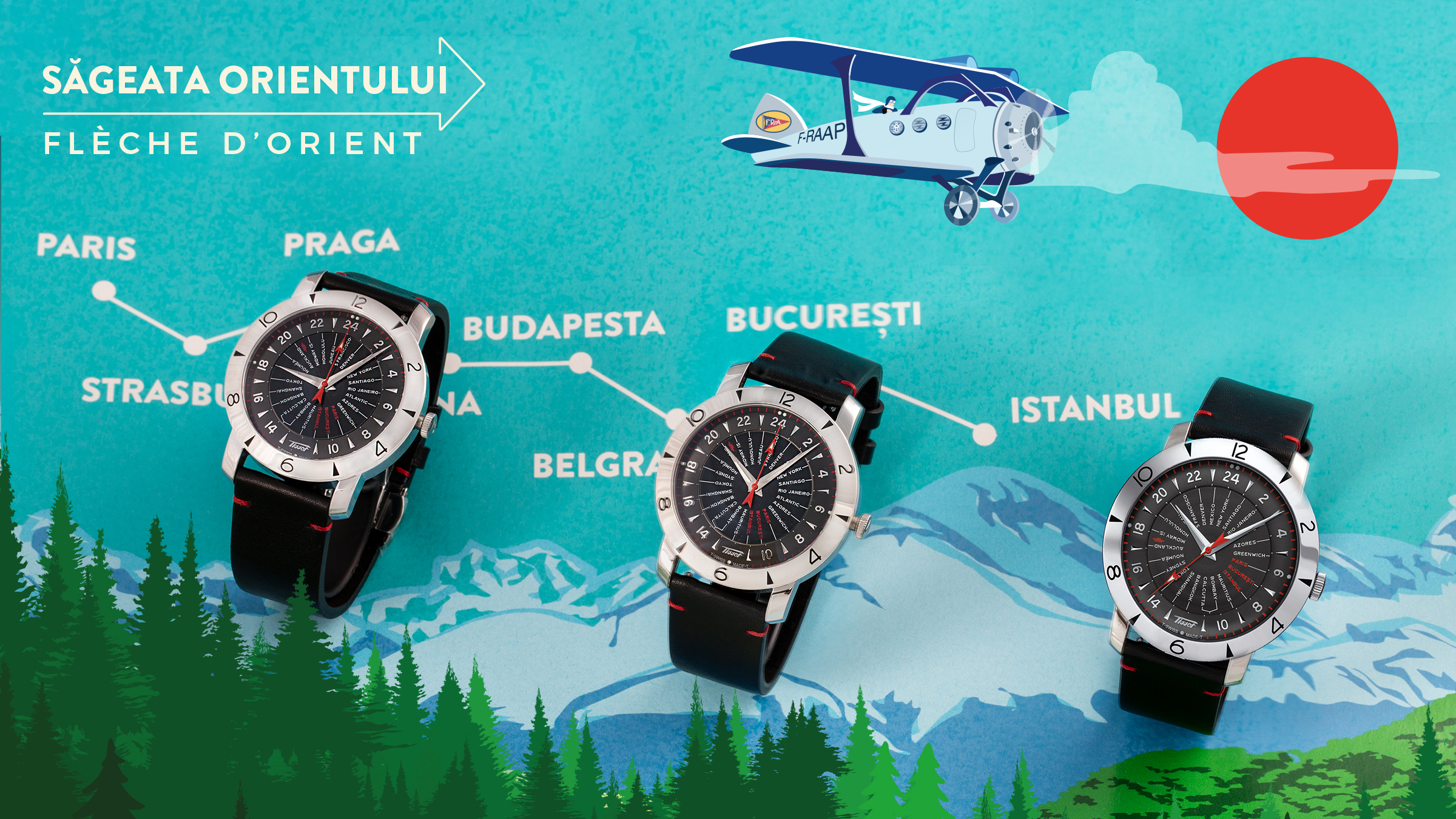 The Arrow of the Orient

Săgeata Orientului was the main route of the French-Romanian Air Navigation Company (CFRNA in Romania), the very first transcontinental commercial air company in the world and its conception can be traced back in Romania in the 1920s. The people behind it were a Romanian Francophile banker who came up with the idea and a former French war pilot who was in charge of developing the infrastructure. Later on, one of the biggest politicians in Romanian history named Nicolae Titulescu entered the fray and fostered relations with other European countries with the aim of making Săgeata Orientului their common goal.

Through time, the airline got bigger and bigger and eventually splintered into several companies like Tarom or Air France that are still flying today. To honor its legacy, Albini Prassa – the main Tissot distributor in Romania – was planning to launch a limited-edition Heritage Navigator of the same name as the famous route and Minthical’s task was to make a campaign about it.

We started delving deeper and deeper and we realized that there was so much to this story that it became integral to the project.

It was a complex affair that spanned across countries and continents and involved pilots, manufacturers, politicians and servicemen and the best way to bring it to the people was to write a book about it. A book that connected all the dots, that described all the people involved and their contributions and why their endeavor was so significant. It was created with the help of historian Dumitru Lăcătușu, from the Historical Consulting Centre in Romania and it is full of relevant information that would otherwise go unknown: paper clippings, photographs and testimonials from that era.

However, it wasn’t just because we needed room to say everything. It was because once we realized this part of history had fallen through the cracks, we needed to make sure that it could not happen again.

www.sageataorientului.ro tells the story of the first transcontinental commercial air company. It details how it all came to be, the people that had a role to play in it, how former war planes were repurposed, the extraordinary efforts that were put in, as well as the overall significance of the whole collaboration. Because it all happened in the 1920’s, we used an art style reminiscent of the period, but slightly modernized with more vibrant colors, so that the site would be attractive, but not clash with the old black and white photographs.

Maybe the most important aspect of this site is that the story of Săgeata Orientului is now available in three different languages (EN, FR, RO), considering that until November 2020 there was hardly any information on the internet.

The short video format is perfect teaser for the story, because it not only offers a decent amount of insights, but it also provides an entertaining type of content accessible to everybody.

The animation for Săgeata Orientului is just that: a short and sweet piece of content designed to deliver enough historical facts in an engaging way as to make the audience want to know the whole story. The art direction is the same as on the web site it promotes, a slightly modernized version of the style prevalent throughout the 1920’s.

When launching a limited-edition watch intended to celebrate an important historical event that somehow slipped through the cracks, you can’t just talk about one or the other, you have to talk about both and you have to keep your audience engaged and curious about both.

The social media campaign kicked off with a few teaser posts that showed some of the details on the watch: like the hands, the GMT disk, or the back monogram. After TISSOT was introduced, several other posts with snippets came to present the story and direct the audience towards the dedicated website. From there on, the posts alternated between presenting more details of the watch, its packaging and accessories, as well as detailing elements of the story behind it.

Săgeata Orientului has to fight off some pretty stiff competition in a shop environment where everything tries to steal your gaze by being all shiny and displayed for all to see.

The perfect way to stand out was using the already existing illustrated approach that had been created, to serve as the backdrop for the story behind the watch.

Nine posters were made depicting key moments of the tale and were then placed all around. Due to the bold colors and the fact that they were drawings, as opposed to photos, they would be hard to miss in this monochrome setting. At the same time, they were very much in line with the campaign philosophy by managing to give the audience little snippets of history, just enough to drive home the main idea while also arousing curiosity.